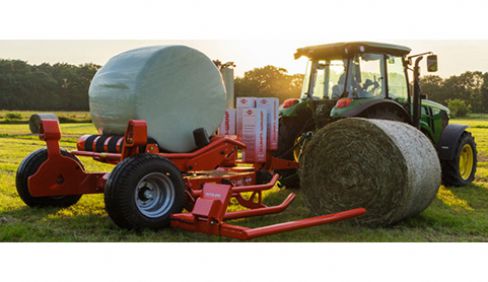 The professional Kuhn RW 1610 round bale wrapper is ideal for those wrapping operations where high capacity and high efficiency are required. Due to its strong design with low table height and standard large wheels located at the rear, there is no need for an active fall damper. This saves extra process steps and the bale can be unloaded on the go. The RW 161 is equipped as standard with a high grip film cutter and film roll holder for two rolls.

The RW 1610 is capable of loading the heaviest bales (up to 2,645 lbs.) thanks to a rugged designed main frame, adjustable loading arm and four belt wrapping table. Constant weight transfer towards the tractor avoids slippage in hilly circumstances. In addition, the Kuhn RW 1610 can load and carry a second bale in the loading arm during wrapping. The RW 1610 can be operated via the three levers cable control (M) or computer control box (C). The bale turner, RF remote control, film roll holder for four additional rolls and e-Twin pre-stretcher are optional on the RW 1610. - Less

The professional Kuhn RW 1610 round bale wrapper is ideal for those wrapping operations where high capacity and high efficiency are required. Due to its strong design with low table height and standard large wheels located at the rear, there is no need for an active fall damper. This saves extra process steps and the b... + Read More

Once the desired number of film layers have been applied, the film is then held firmly and cut. On the turntable wrapper models, a spring-loaded or hydraulic high-grip film cutter holds and cuts the film automatically without the need for extra controls. On Kuhn satellite wrappers, the well-known “scissor-type” cutters hold and cut the film. Due to its design, the film is caught across the full width. The film is held with a clamp, gathered into one solid rope and then cut before the bale is unloaded. The clamp firmly holds the film ready for the next bale.

The Kuhn trailed turntable wrappers have a unique low-profile design ideal for stability when loading, wrapping or unloading a bale. The rear axle position results in a low table height eliminating the need for an active fall damper. There is constant weight transfer to the tractor that prevents up-and-down movements of the drawbar and prevents tractor wheel slippage when driving uphill with a bale on the table or loading arm. The bale can be dropped on the go for maximum output.

The standard pre-stretchers which hold a 30” roll, are made of aluminum to avoid build-up of tack from the film. Both outer ends of the aluminum rollers are cone-shaped to maintain the optimum width of the film and reduce the risk of film tear. The special ribbed profile of the aluminum rollers keeps air and water away from the film. The location of the pre-stretchers makes it very easy to change the film rolls. The standard pre-stretch of 70% is reached by a low-maintenance and low noise gear transmission.

Besides a standard single stretch, Kuhn introduces the RW 10 series with patented e-Twin system for excellent, cost efficient, fast wrapping. The innovative e-Twin technology enables wrapping via a unique combined pre-stretcher design with patented film distribution to save 50% on wrapping time and further film savings. The conical pre-stretch rollers have been positioned in such a way that the two 30” film wraps with 2/3 overlap are glued together providing a double layer before they leave the pre-stretcher unit. Optional on some of the wrappers is the auto film layer correct kit. The correct kit detects and empty or torn film roll and adjusts the required amount of table rotations to cover the bale with the required amount of layers.