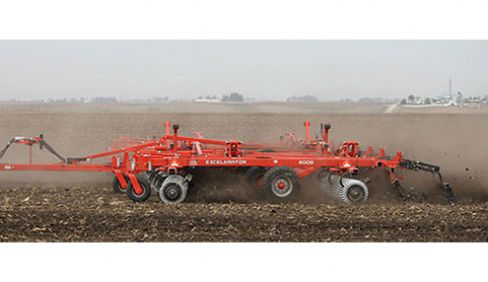 The Excelerator® vertical tillage system from Kuhn Krause provides exceptional residue cutting, soil and residue mixing and seed bed preparation in one pass, utilizing an exclusive 4-step process. True vertical tillage delivers residue cutting and soil mixing without soil shearing or smearing in the critical zone for seed placement and young seedling root development. With its unique Excalibur® blades designed to meet the challenges of cutting tough GMO residue, you can be confident that the residue management achieved during fall operation will allow maximum residue decomposition over winter. In addition, spring operation will accomplish your goals of superior seedbed preparation in high residue situations.

This critical component also assists in breaking out any remaining uncut soil between blade paths, providing a smooth, even surface for planter row units to place seeds consistently in the seed zone. Star Wheel™ gangs are spring cushioned to contour over varying field conditions, provide a uniform finish, and evenly distribute residue across the soil surface.

The proven 24/7® soil conditioning reel delivers clod sizing and firming for this high-speed operation. Available with flat blades for maximum clod sizing in hard soil conditions or round bars for increased soil firming in loamy soil conditions, this effective component produces a superior finish in any field.

The 24/7 reel also has the ability to ‘float’ with a simple in-field adjustment, allowing continued operation in wetter soil moisture conditions.